The wind is blowing, stirring the dust particles, and gradually blurring my eyes.

“Let’s go.” Bi Qingshen Jun took my hand, and summoned a cloud, to return to the heavenly realm.

While departing, my ears vibrate a little, I suddenly hear a ring from the distant grass, as if it was breathing, my spirit was suddenly aroused.

Breaking free from his hand, I approach in the direction of the quiet sound, a cat’s footsteps on grass is silent, and does not startle the dust particles.

At the target destination, a large, yellow, and thick tail was hanging out of a tree.

“Heheh~” I couldn’t help but curve the corners of my mouth into an arc, I ferociously pounced over, and grabbed the tip of the tail with my paws, mercilessly dragging it out.

“Ahh wooo!!” The tiger’s roar ripped through the sky, his claws were trembling and was clinging to his head, he did not dare open his eyes and repeatedly asked for mercy, “King Miao Miao is not here, if you want to fight don’t look for me! We are innocent!”

I stare at his pitiful face, and could not help curl my lips and say, “I want to fight you, what are you going to do about it?”

“Don’t ah! This little one can not even endure even one strike, and will admit defeat!” After he finished speaking, he felt something odd and not right, he immediately opened his eyed and saw my silhouette, life seemed to flow back in. He happily jumped and excitedly exclaimed, “King Miao Miao, you came back! This little one misses you to death!”

I was going to go and give him a big hug, but I did not expect Bi Qingshen Jun to suddenly shoot forward and push him a few meters away.

“This…..how did this happen?” The tiger looks left and right, touched his head, and asked, “Why was I pushed back out of thin air? King Miao Miao, did you learn some new skill?”

I quickly waved my hands and said, “No, no, it was Bi Qingshen Jun that pushed you back, right now, he is right beside you.”

All the hair on the tiger’s body immediately stood up, he crawled and looked all around, “Nothing, where is he? You lied to me?”

“Mother!!” The tiger was scared the crap out of, he repeatedly moved back and kowtowed, “Master Shen Jun, I do not do evil things, do not kill me!”

Yin Zi said that all monsters have different interests, as I like to roll around and bask in the sun, and he likes to collect gems, gold, and silver. I think that the tiger’s interest must be bowing his head, because each time I meet him, he bows his head…..I’m afraid his head may turn into a big callous soon, but I can’t stop the interests of others, so I squat on the ground and happily watch him kowtow.

After bowing for half a day, I started to grow impatient, I loudly discourage him, “You can bow later, ok?”

“But…..” He fearfully gives a glance to Bi Qingshen Jun, and timidly retreats to behind me, his head near the ground, almost entering the bottom of my skirt.

Upon seeing this Bi Qingshen Jun was furious, “Come out!”

From head to toe, the tiger’s whole body shuddered from fear, foaming from the mouth, he faints. I quickly grab his body and fan him to cool him down, and revive him.

His head was as big as a pig’s head when he awoke, he threw himself into my arms, crying, and begging me to help him plead for mercy to Bi Qingshen Jun.

“Good tiger~ Well behaved tiger~ Don’t cry~” Although I often bullied him, there was, after all, 300 years of friendship with him, but I do not know why Bi Qingshen Jun must be angry. I will save this stupid tiger, I held his head and turned my head, and said, “Do not frighten him.”

Bi Qingshen Jun’s expression grew even more frightful, he took a few breaths, and snapped, “Let him stand up and answer!”

“You really won’t kill me? Really?” The tiger carefully asked a dozen times to verify, he finally stood up, looking at us, but dared not to speak.

“When did Luòyīng Mountain become like this?” I quickly asked him before he started his spasm of kowtows.

“About…..half a month ago…..” The tiger’s voice was quieter than a mosquito’s, but it was more gentle than a newly wed wife.

“Where did Yin Zi run off to?” I continued.

The tiger dipped his head down and stared at the grass on the ground, he replied after a long hesitation, “We have not seen Master Yin Zi in a very long time, after King Miao Miao left, Master Yin Zi said for me to temporarily act as the chief, and then he disappeared, but very soon, the earthquake struck…..many of the monsters on the ground died, there was no more food and everybody was starving, so the surviving monsters went their separate ways.

Bi Qingshen Jun frowns and asks, “If there was no food, then what did you eat? Perhaps it was people?”

“No, no! This little one does not dare!” Under the tiger’s thick fur, suddenly showed a little red, he said, “I learned to eat grass…..” 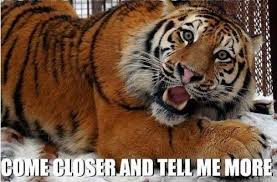 Bi Qingshen Jun’s face was frozen…..I stare at the tiger with admiration, I absolutely can not change from eating fish no matter what…..

Knowing that Yin Zi was alright, I felt my mood clear from cloudy to sunny, all the sad moments are already gone, so I pulled at Bi Qingshen Jun to go to Bull Devil’s place to play.

Bi Qingshen Jun could not stand my begging any longer, and finally agreed, but he requested that I return to the heavenly realm by nightfall. I was absolutely not allowed to reveal his stealth technique, and not allowed to tell other monsters and humans about his existence.

I swear to the heavens that I would obediently comply with his agreement.

Bull Devil’s home was a picturesque place to live in, I’ve been here many times, and very familiar with the road, two three turns and you will be at the cave. I knock on the big red door, a little servant girl came out, her face was bruised purple, I do not know how she was wounded, but upon seeing me, she pulled my sleeves and happily said, “Master Miao Miao, you must quickly persuade the madam…..”

Her voice has not yet fallen, and an inkslab was fiercely thrown out, I quickly stepped aside to avoid it, and then I heard Luo Sha roar, “You heartless person, what did you come back for?”

I, Hua Miao Miao am not afraid of the heavens nor the earth, but I fear Luo Sha, she has always told me all sorts of wicked things like braised cat meat, and steamed cat meat stories. In order not to be sold to evil people as food, and in order to eat her delicious food, I show her extra respect…..granting her every request…..

So I raise up my tail in fear, taking two three steps to the front to apologize and admit my mistakes, “Luo Sha sis-in-law, Miao Miao is indeed heartless, but she immediately went and searched for her heart and brought it back, you mustn’t sell me!”

Luo Sha was looking everywhere to find objects to hit people with, hearing my voice, unamused, she turns and says, “How come it’s you? Didn’t you go with Bi Qingshen Jun?”

I drooped my ears and went up to her, and said, “Miao Miao came back to see you and gēgē, don’t hit me…..”

“I…..thought it was that bastard that returned,” Luo Sha put down the crystal she just picked up, and came over to hug me, she started crying, “Your bastard gēgē…..secretly has another outside, now, everyday he does not come home, how do I live now…..”

“Don’t cry, don’t cry, what is another outside?” I questioned while comforting her.

Her tears and snot was wiped all over me, she cried very heart brokenly, “Your gēgē and a sly fox are good, now he is not home at all, he even urged Hong hai’er to slip out, leaving me here all alone, men are not good things!”

*Fox: in this case means a third person (ex. another woman, or prostitute, or something like that, probably not an actual fox)

I touch my head, I don’t understand what she is saying, and then I ask, “Isn’t a fox demon very pretty and very gentle? Isn’t it good she and gēgē are well? Why are you angry?”

Luo Sha was very irritated and very angry, she brutally knocks my head, and shouts, “Well? You stupid cat?”

“Meow woo~” I carried the large bump on my head, my heart great injustice and frustration…..

i bet luo sha got it wrong again…the bull devil probably is doing some serious work, like searching for miao miao…..
thanks for the chapter!!!!!