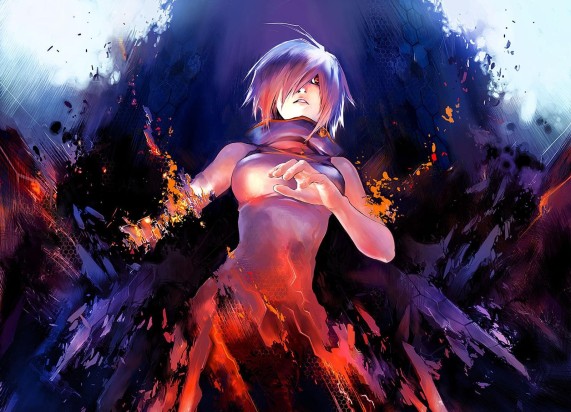 The continuous motion of falling through the layers of clouds made me feel a deep sense of crisis. I got up with difficulty and viciously took a bite out of Yao Yang arm in desperation.

Yao Yang seized both my arms, and then used his other free hand to sprinkle a beige colored powder onto me. This powder had the same smell and temptation as the one on the purse, paralyzing my nerves in the process. It was as if I had eaten a kind of drug or something, I could not control my body nor could I think clearly.

Hateful! This kind of despicable guy! It was difficult controlling my body, but I managed to get back up and using my Heaven Shattering Claws, I clawed at my own arms, trying to wake myself up from this delusional state.

“Stop it, I don’t want to resort to killing you.” Yao Yang’s voice was still like a stone’s, no feeling at all. He had no mercy, he gave a chop to my neck, almost breaking my neck and knocking me out in the process.

My vision turned into a sea of darkness. Before I lost complete consciousness, I saw a giant red bird heading towards from the north.

Cold water suddenly splashed onto my body, from the hazy dim-lit glow of the candles, I was lying on the cold hard ground. It was almost as if I had just woken up from a long dream.

There was a slight nudge on my arm, but the sound of crashing metal roused me up. I stared intently at my surrounding, and discovered that I was in a cave. I was on top of a platform, surrounded by lava all around, and connecting the two were bridges on either sides. My four limbs and neck were linked to long chains connected to iron posts.

Even dogs aren’t this cruel! I tried to shake the chains off, but found that they very strongly made, and didn’t budge at all. Thus I tried to desperately bite them off using my teeth.

My teeth were about to break from the gnawing, but only minor scratches could be seen on the shackles. I stood up and went to look for a method to pry them open.

The sound of footsteps getting closer became apparent, it was Yao Yang who had taken on the appearance of Jin Xian, his expression detached. There were no changes in his face.

I sniffed the air, and suspiciously asked, “What are you? How come you have same familiar smell of Jin Wen! How can you be Yao Yang?!”

“Oh, I forgot, this isn’t necessary anymore.” He took a several paces forward, reached forward to grab the skin on his face, and then after a moment of pause, the beautiful skin of the young girl had been torn away. His stature grew almost by a whole foot, revealing another face. It was the same handsome face that had been hanging at the Southern Gates. The same short brown hair and green eyes, he was wearing black fitted clothing. On the outside he appeared quite cute, but despite that, his expression was like that of a rock, without any emotions. He let out a chilling aura from his body, very frightening, so frightening that it reaches the bones.

Although witnessing this horror, my pride did not allow me to retreat. I just raised my head up and asked loudly, “Didn’t you die already?”

“The one that died was my brother, a substitute.” Yao Yang gave a simple reply, he smirked and continued to say, “I used the skin of this woman to hide from the eyes and ears of everyone.”

“You…..you killed Jin Wen’s sister and then took on her appearance?” The truth was slowly revealed. I angrily shouted, “Jin Wen really loves her sister! What you did will make her really sad!”

“Jin Wen is a good girl, thanks to her I was able to obtain the Pill of Immortality. Otherwise, how would my injuries be able to heal so quickly.” Yao Yang took a few more paces forward, and with his terrifying green pupils, he stared at me and said, “Too bad she was so stupid, even after so many years, she didn’t actually find anything odd or wrong.”

Of course she didn’t find anything odd, that’s because she spent her time whole heartedly looking for cures for her sick sister. Wawa said that she had originally wanted to sacrifice her own body to seduce Shen Jun in order to obtain the Pill of Immortality. Although I didn’t know why she would need to sacrifice her body, I went to help steal the pill for her. She was willing to face torture and even execution not for herself, but for her sister.

Every time Bi Qingshen Jun granted gifts to her and the other servants, she would find the good ones and send it to Jin Xian. She even personally grew some herbs and medicinal plants for her sister, waking up every morning before dawn to tend to the garden. This was all for her younger sister.

But…..her most beloved sister is actually a fake.

I no longer continued to think about this, there was a new kind of hatred welling up in my heart. I lowered my head silently and began to think of how I could hack this bastard to death, and then fry them so Jin Wen could eat him.

“Bi Qingshen Jun ruined the plans I so painstakingly built,” Yao Yang slowly said, “This time I’ll make sure to defeat Bi Qingshen Jun completely and crush his reputation so he won’t ever be able to raise his head again in the Heavenly Realm.”

“What do you intend to do?” This madman’s speech in front of me generated a wave of panic within me.

“His biggest weakness is his confidence, and as for his lieutenant Haiyang, it’s his recklessness. That’s why they were not able to formulate that I would be sacrificing my own brother as bait,” Yao Yang suddenly started laughing, “He thought I was already at his mercy, but he was wrong. His worst enemy had actually been hiding within his homes.”

“How can you lead your own brother to his death?” I asked in dismay.

“To sacrifice himself for the better of the Demonic Realm is a merit.” Yao Yang replied dismissively.

“You captured me in order to harm him, right?” I looked at his face, feeling uneasy, a sudden thought appeared within my mind, “You’re going to trick him into coming here, and then ambush him? Let me tell you! I’d rather die than harm Shifu!”

“Wrong, you’re just a tool for demonstration,” Yao Yang laughed, “I already sent a message telling him the location of this Nine Thunder Hexagram, whether he is coming or not, the end result will be the same.”

“What does that mean?”

“That means that if he comes here then the formation set up here would guarantee him an instant death. And if he doesn’t come, do you think the Jade Emperor will forgive him easily for making such a big mistake? Harsh punishment would be waiting for him. Most likely, he would be stripped of his military prowess, or perhaps turned back into a mortal being. Since this would hurt his pride more than death would, he will definitely come, and alone as well. Using his confidence and power, he will try to break this hexagram, this way there is a chance of survival for him.”

Hearing these words, I could no longer remain calm. I was in panic. I just wanted to run away with Bi Qingshen Jun, and from those bastards the Jade Emperor and Yao Yang. So, I stupidly plead to that jerk, “Since I’ve no use, then let me go!”

“You’re something I’ve promised to give to a certain individual, so I can’t just let you go.” Yao Yang stopped smiling, his voice becoming serious.

“Who?” I couldn’t believe that this madman would stay true to obligations.

Yao Yang’s expression suddenly turned into resentment and hatred, twisting up. He fell into a silence, and then left after a moment of pause.

Thank you for these chapters! We have missed you so much, calicoxtabby!
Who wanted Miao Miao? Ah, such a cliffhanger! 😰

Wtf? Who wanted MM so bad?

it is xiao tian? or ao yun?

Someone in the demon realm like the elephant who proposed marriage. Why is YY angry. Does he want her for himself now?

Dont tell me it’s Ao Yun. I like him!
Maybe it’s that Elephant demon who liked her so much from way back in the beginning?

After a hundred chapters, a plot!?! And the plot thickens!